2022 Nebraska Librarian of the Year

Doug Keel was awarded the 2022 Nebraska Librarian of the Year Award.  Doug Keel is the school librarian at R.M. Marrs Middle School, one of three middle schools in the Omaha Public Schools offering a dual language program.

Nominated by Colleen Nieland, she states, "Whenever someone asks me who is a model librarian, Doug’s name is the first one to come to mind. Doug was my unofficial mentor when I entered the library profession 15 years ago. The very first library meeting, Doug offered to help with anything I needed. I’m not sure what my first year as a librarian would’ve looked like without Doug, I have called on him countless times during my career as a librarian for ideas and feedback. Doug is one of the most creative and innovative  librarians that I have had the pleasure to work with."
"Doug is one of a kind." 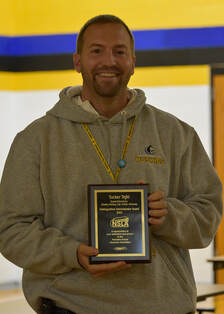 Tucker Tejkl, was awarded Distinguished Administrator by the Nebraska Association of School Librarians by Dr. Christine Haeffner (NSLA President-Elect).  The Shelby-Rising City Public Schools Superintendent received the award before his school staff. Although a new superintendent, “no one has had more of a positive effect on my school library than him” states Mandy Peterson who nominated him for the award.

She shares the many ways he had positively impacted the Shelby-Rising City School Library. “He asked what my goals and priorities were so he could support them, and he asked about my concerns. My major concern was a safety issue, and he worked to get maintenance, the school board, and the public library (with whom we share the space) all on board to address that concern. He has continuously promoted and enriched my school library efforts. He always shares what the school library is doing on social media. He was a guest reader for my library classes when I was unexpectedly gone.”
He is active in many aspects of the library program.

Peterson and Tejkl worked together to update the school library’s policies this year. Which were updated unanimously with no changes. During a three-week period , which included the library’s annual Change War and Book Fair. Mr. Tejkl went above and beyond.  “In 2021, our change war raised $1333. For the Change War this year, Tucker suggested coming up with tiers of fundraising and having the administration team do silly things. Because of his efforts, we raised a staggering $4287! This money went to pay for incentives and get books into the hands of students through our first Husky Heart program. This allowed kids to choose any book for free at the book fair, update classroom libraries PK-12, and improve our overall school library. We installed bins for board books and early chapter books, clear shelf inserts so we could forward face some picture book shelves, and added two spinning units to house our leveled readers. We were also able to add 2 Dash coding robots with accessories, Book Buddy kits, and Rubik’s cube kits to keep our kids engaged. He amped students up by getting on the school roof in the mascot costume and waving to them before school, getting duct taped to the wall, and getting slimed while eating crickets.

“He’s also gone to bat for school libraries and school librarians as an advocate to the Nebraska State Board of Education and legislation. Mr. Tejkl has made many phone calls and written many emails to address concerns regarding proposed bills, the attack on school libraries, and the superintendent’s view of what is really happening in Nebraska schools. When the opportunity arose to join with AASL as part of an administration group, he jumped at the chance to apply.

"Tucker Tejkl is a powerhouse of enthusiasm and support for all of his students and teachers - including the school library."
(photo credit to Emily Blackburn)

And a Good Time was Had by All

Many of us gathered at North Star High School in Lincoln for the annual Nebraska School Librarians Day.  Many others joined us via Zoom.  It all came together because of the hard work of Erin Hanna and Jeralynn Moser and their committee.

President Kelly Kenny welcomed all attendees, physical and virtual.  She introduced our keynote speaker for the day, Carolyn Foote, Co-Founder of the FReadom Fighters, a grassroots library organization supporting librarians, students, and authors.  She spoke on the topic “Working Together: Defending the Right to Read.“

Fifteen sessions were held over the next ninety minutes.  Sessions ranged from collection development and promotion to library promotion to using canva to preparing for book challenges.

We broke for lunch which included much visiting with new friends and catching up with old friends. The annual meeting of the NSLA followed lunch.  There was the business, of course, but many awards and recognitions were also included in the agenda. Courtney Pentland was awarded the Meritorious Service Award for her leadership and service to the organization. Susan Knisely, Library Commission Online Services Librarian, and Deb Robertson, NLA Advocacy Committee chair received AASL commendations on behalf of the advocacy work done by their organizations in Nebraska.

Many prizes, donated by vendors and organizations, were awarded to end the day. Our thanks to all who contributed to making the day a success.
Announcing our 2021 Nebraska School Librarian of the Year Award Winner: